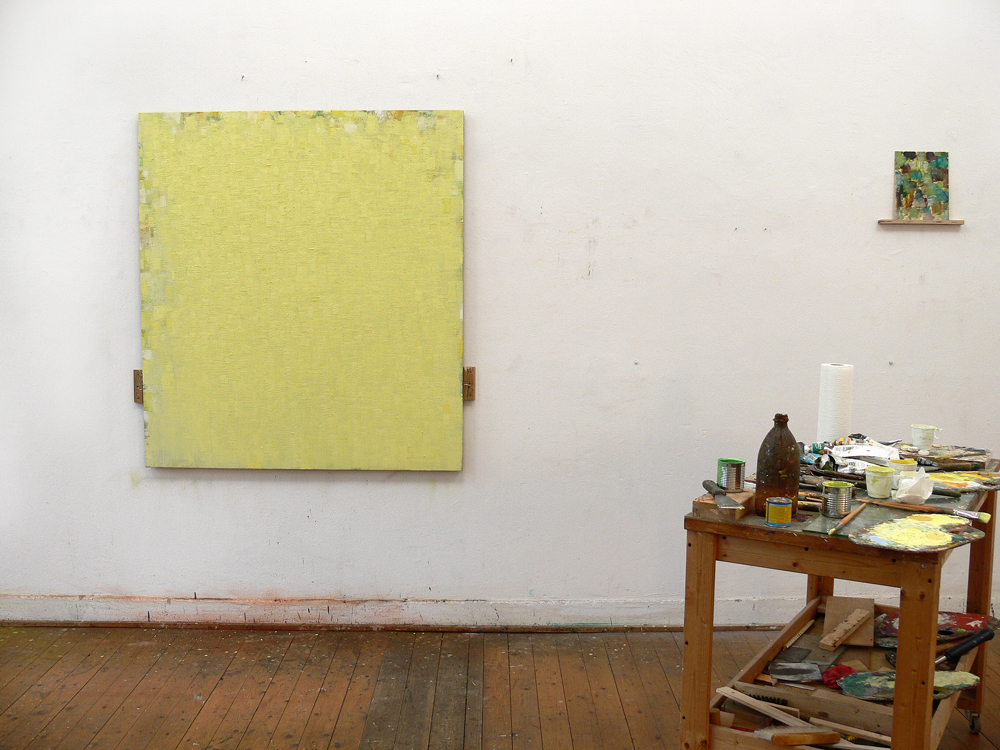 Painting (i.e. spreading paint on a surface) that does not represent anything (i.e. that refers toneither a figural nor an abstract reality), can seek to attain immateriality as a coloured surface or,as is the case with Peter Tollens’ paintings, can develop as coloured materiality into a concretepresence in space. In his recent work Peter Tollens has intensified the corporeity that has beencharacterising his paintings more and more since the early 1980s. The crucial element – the surface of the paint – has acquired a crusty, earthbound heaviness but at the same time thelightness and fragility of dust, for the seemingly tough mass of paint looks extremely dry andmatt. The colour-relief emerges from layer upon layer of paint whose different characters finallyinteract on the fissured surface, hinting at how the painter handled the paint, how it was spreadover the surface. Tollens uses only oil and egg tempera pigments and mixes them himself; theirconsistency, due to various additives and subtle variations in the mixture, enhances theirmateriality. He applies his paint to prepared rectangular wood or canvas carriers, always with abrush. The width of the brush and the length of the brushstroke depend on format and paint; theyalso tell us how close to his surface the painter worked. The painting is a visual record of how itwas made, and time plays a part in the viewing of it. Not until he has decided on his principalcolour does Tollens differentiate the chromaticism during the painting process, constantly reactingto feedback from what he has already done. He may react by completely covering the first layerof paint, sometimes by inverting the colour-witness the edges of colour on formats filled in allover with painstaking thoroughness. While the underlying layers are importantly involved informing the relief, their effect on the surface colour varies considerably. Those fragments whichdo remain visible correspond with minute scraps of colour which Tollens works into the top layerof paint at the same time as his principal colour. The tiny reserve areas of colour stand out on that final, layer as patches of graduated mattness, occasionally glinting with restrainedhighlights. Given the minimal differences in a densely packed gamut of colour, this produces anincredible sense of depth that is particularly effective in different lighting, i.e. when lit from thefront or the side. Tollens eschews decorative effects such as maximum contrast; he wishes toprevent the colour from monopolizing the beholder’s attention. The painting process is not apreconceived development towards the topmost layer; together, the layers are meant to produce acontinuum which the beholder can extend in the act of seeing. The mutual dependency of paint,brushwidth, length of brushstroke and picture format is just as decisive for this act of perceptionas the format’s relationship to the beholder is. The sparse insertions of colour expand the originalimpression of a principal colour into a perception of a chromatic tension which is ambiguous, butwhich because of its remarkable individuality generates concrete, material associations which onlyachieve the utmost precision in one situation for each beholder. The first experience is that different lighting causes a fundamental change of chromaticism. Due to the surface’s pronouncedrelief character and its shifting shadows, this first experience may be forgotten. The pictureregains its non-referential autonomy and perhaps, in another situation, give the same beholder adifferent experience. In this act of memory the corporeity of the works attains a realism surpassing the possibilities of representational painting.
Contrary to any kind of conceptualism, Peter Tollens adopts an almost romantic position in hisintuitive handling of paint, thereby rendering plausible the ostensible contradictions in the act ofpainting – such as reverting to a colour from one of the underlying layers of paint. Tollens is notprimarily concerned with an ontological approach to painting, colour and its perception, whichmight merely be prompted by an object resulting from a dogmatically employed artist concept.The material presence of his works shows painting to be more a process of craftsmanship,producing an object which faces us as something unmistakable, personal. This does not mean that Tollens’ art should be seen as „radical“ – if there were any justification whatsoever for such alabel -, since it frankly does not seek to formulate as its goal any other artistic concept in thetradition of the modern. The painting acquires a pre-modern, almost semantic function in the actof seeing. It may be that this tradition in painting as revealed by Tollens, starting with theselection and handling of his materials, that this aura of a work of art’s originality, is ananachronism inasmuch as the possible effect of these works evokes structures of memory in thebeholder which are as earthbound as the works themselves. As objects of haptic experience theyrepresent a reality which, in the virtual era, is in increasing danger of becoming lost to oursensory faculties. Our perception is still influenced by the awareness of the loss of this reality andof possible memories aroused by the works. But what if these works, by virtue of their materialpresence, were able not only to recall fundamental material experiences but could also enablereality to be experienced in them? That is exactly the question from which the necessity arises fora fundamental realisation, in every generation, of painting’s sensory and hence meaningfulpotential. „New“, in view of this necessity, is not an adequate criterion; awareness of means, theirdescribed interaction and contemporary relevance would be better. 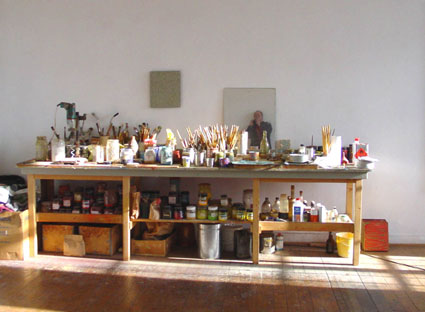 Instead of writing about these paintings again, I might just as well write about a loaf of bread. I could try to describe it, its shape, colour and surface, its density, how it smells and tastes. Descriptions of colour painting tend to follow that pattern, and are much of a muchness. I amtired of reading about these cumbersome visual aids and tedious production analyses (… I don’thave to know how bread was baked in order to taste it). Every in-crowd cultivates its own idiomand its own behaviour which – like discussions about art – are accepted as methods. Thesedescriptions usually convey only a connection with art, notably with painting; sophistic attempts atdifferentiation serve to distinguish one concept from others. In the case of Peter Tollens, though,comparison with sculpture or photography or something completely different – jazz, for instance would probably be more illuminating. For the rest, any attempt to describe presupposes a distancewhich I cannot have when I look at these paintings, nor when I eat bread. They were not made for distance. On the contrary, one desires to come close to them. Distance would also betantamount to doubting them. Why should I do that, when I sense the necessity for them? Towards what science should I adopt a stance that is not my own? As if the artificiality of asituation were a proper premiss for conveying the self-evidence of art (… in order to experiencebread I have to eat it). 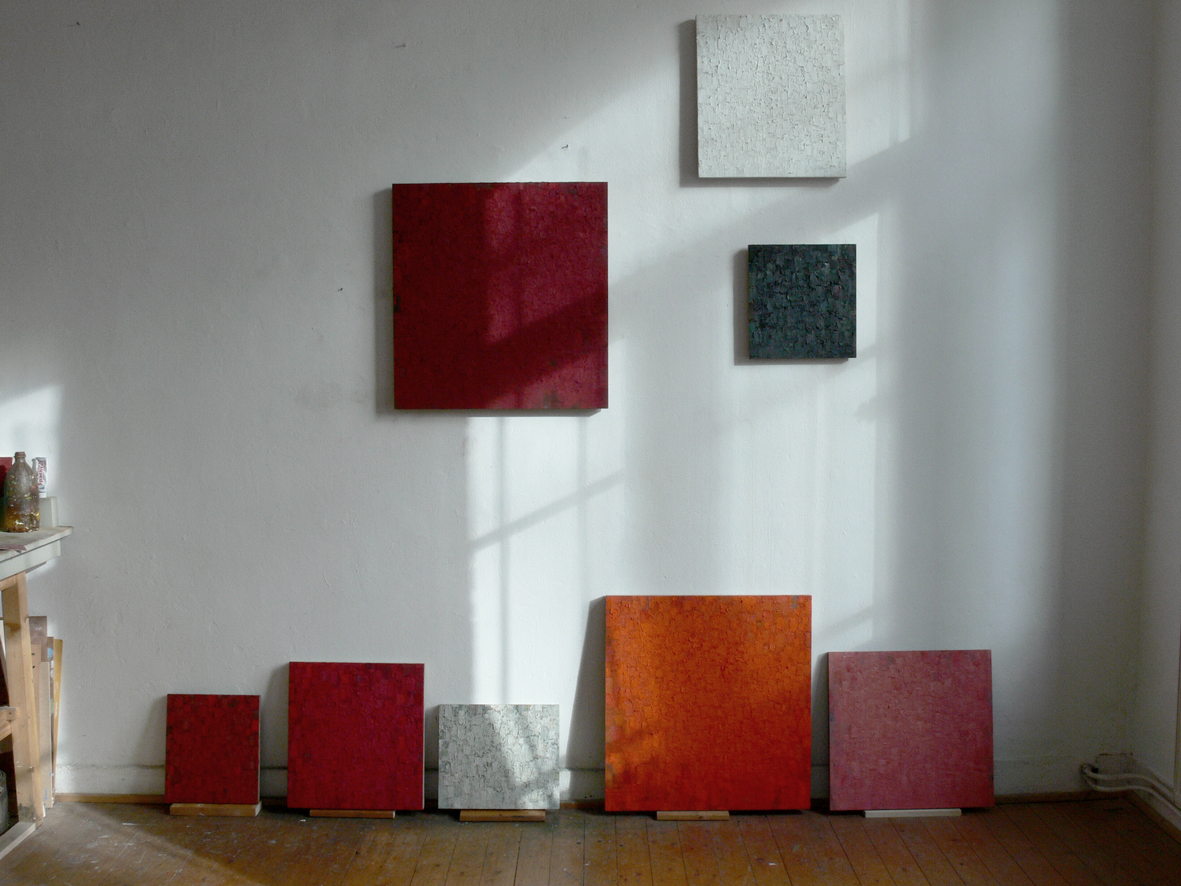 Seeing is the actual process: from which experience is the picture givencolour, and what experience will it give me? These paintings are absolutely concrete. They mean what they are and are what they mean. By that token they are independent of their own origins(… I don’t need to know the baker, nor the field where the wheat grew). As autonomous objectsthey are not part of the wall on which they hang. But as objects of perception they are notautonomous, for they depend on my experience, which places them in a context and gives them astory. In the way they are „made“ I see the traditional craftsmanship of an easel painting, in spite of the fact that I experience them as independent objects in space. Their somewhat upright formatsin various sizes remind me of portraits, which I also have to approach closely in order to discernany individuality. However, we are dealing here with something that is not only represented, orshown as a picture, but as such possesses immediacy. That is why the encounter with Peter Tollens’ paintings is always a voluptuous relating to something else. They satisfy an archaic needfor the closeness of another body, they require microscopic scrutiny. Regardless of whether theyradiate warmth or coldness, of whether we turn towards them or away from them, their enduringpresence assures us of the basis of human existence, which is individual, spacebound and sensual. Because of this nearness and depth, these are strangely slow images.